What Does Autumn Hold?

Every year as we enter the end of summer, I find my thoughts turning to autumn.  It’s a particularly favorite time of year for me.  I love the onset of cooler weather, college football, Halloween and Thanksgiving, and the other joys that autumn brings.  In the investment realm the first seven months of the year have been particularly challenging as we’ve seen high inflation, global conflict, and equity markets plunge into bear market territory.  For this month’s Insights, I want to explore some of the things we’re watching closely over the next few months.

As we’ve shared many times previously, markets typically fare best in “gridlock” scenarios (i.e. Congress controlled by one party and the Presidency controlled by the other).  Midterm election years are often challenging for first-term presidents and this election appears to be following suit.  Polling data and election forecasts suggest that the House of Representatives will likely change hands: 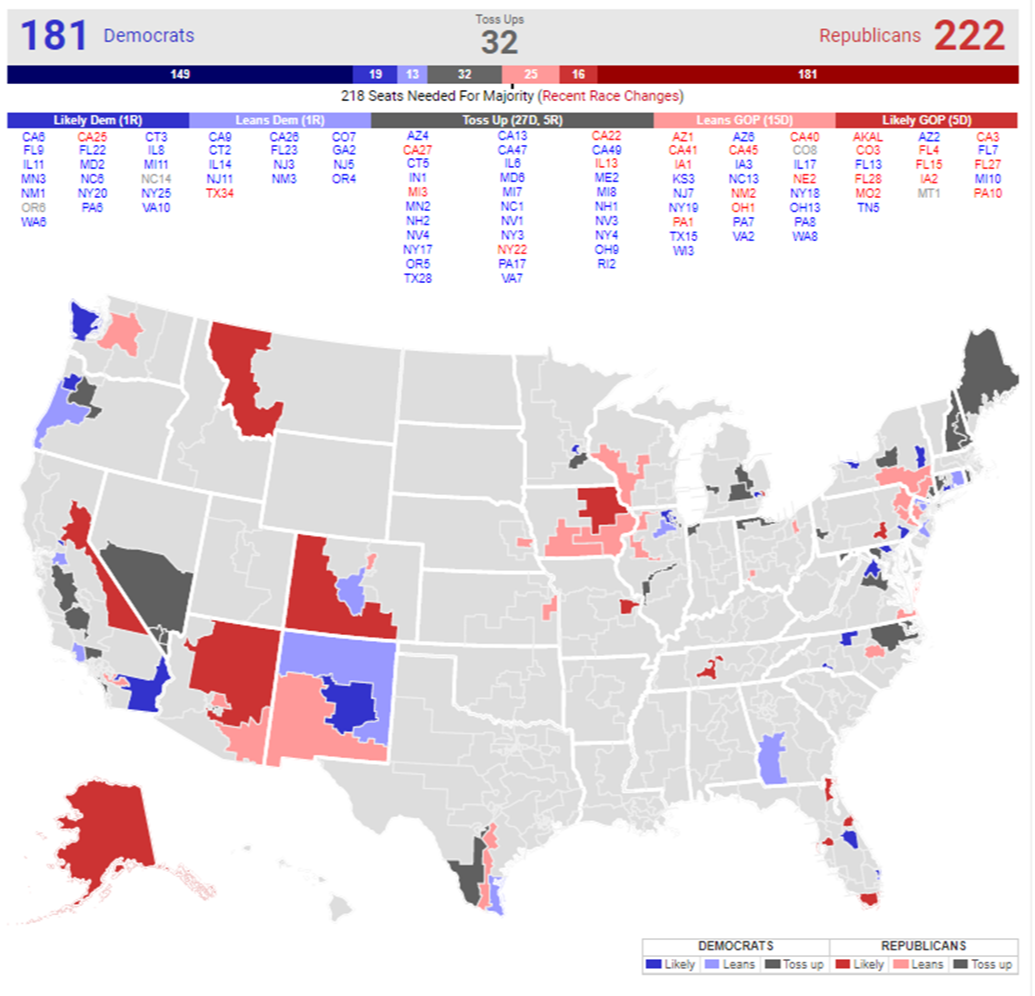 The race for the Senate, however, appears to be a much closer race: 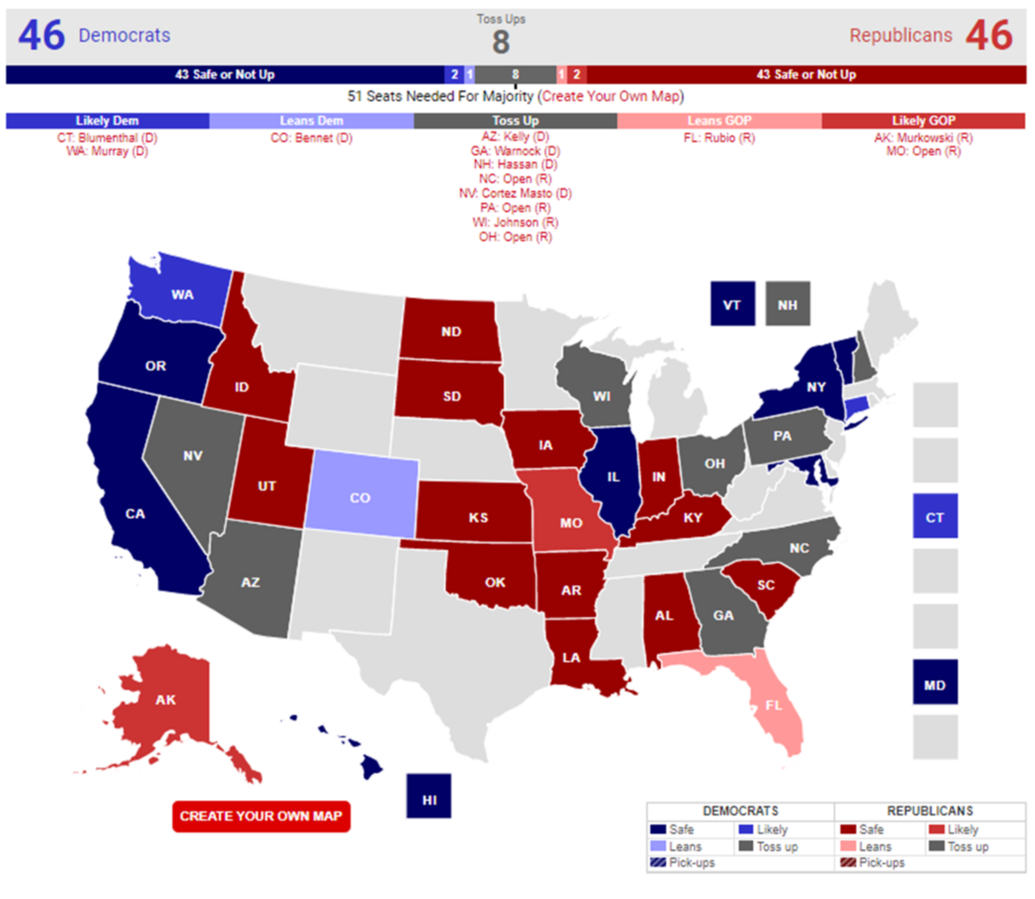 If the polling and forecasts with the House race hold true, we’ll likely have two years of legislative gridlock.  Markets tend to like these scenarios because the absence of legislative change reduces uncertainty and removes a key variable from investor’s calculus.

The key inflation questions on everyone’s mind are how high it will get and how long will it last.  In terms of how high it will get, there are several indicators that we’re likely to see some relief in the coming months.  For example, we’re starting to see relief with retail inventories and supply is starting to catch up with demand: 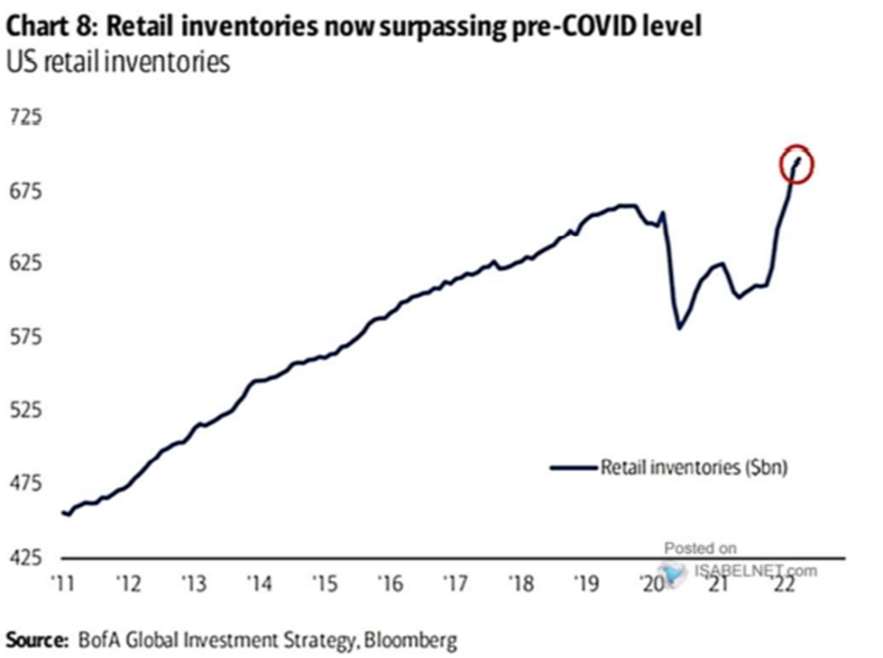 In addition, consumer spending has fallen sharply and this drop in spending will reduce some of the upward pressure on prices: 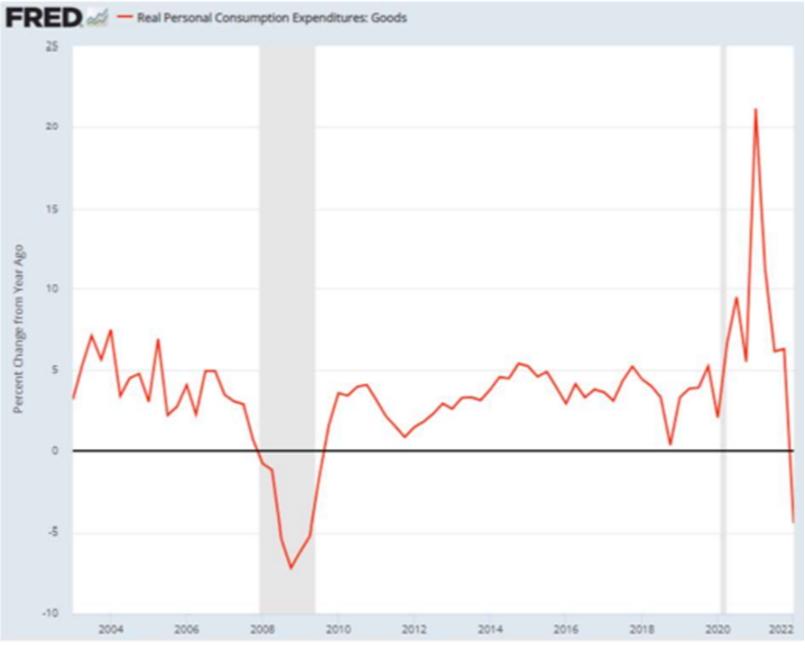 Futures data suggests that fed funds rates will peak in January of 2023 and start to decline by February.  While a far from perfect indicator, this would tend to suggest that we’ll see some inflation relief over the next six months.

This risk is one that worries us deeply as conflicts can arise quickly and unpredictably.  For example, at this time last year, a Russian invasion of Ukraine was not on anyone’s radar, but that conflict has upended global energy markets and exacerbated an already declining market.

For now, the Russia/Ukraine war is a war of attrition largely being fought in Eastern Ukraine.  The most worrisome risks of this conflict (subsequent invasion of a NATO country and/or use of chemical/nuclear weapons) have abated somewhat, but concerns remain.  As we head into the colder months, legitimate concerns exist around energy availability to much of continental Europe.  A sharp reduction in energy availability (as a result of Russia reducing supply) would further harm already slowing down European economies.

The US/China relationship has moved to the forefront of many people’s minds.  While military conflict over Taiwan isn’t imminent, the events of the past two weeks have raised concerns significantly.  Of particular interest is the upcoming Communist Party Congress where Chinese President Xi will likely continue to hold his grip on power.  Some have postulated that any military activity would not occur before the Party Congress meets.  There are also myriad opinions on when a Chinese attack would occur (predications range from months to years to never) and about what said military activity would look like (i.e. a blockade instead of a direct military attack).  While the odds of a direct military conflict between the US and China remain low, the odds have marginally increased and we’re watching this situation closely.

While are many causes for concern with markets and the economy, it does one well at times like these to thoughtfully consider how markets have always coexisted with chaos.  As an investor, there are always concerns over the horizon, but it’s important to remember that this has always been the case.  The below chart drives this point home: 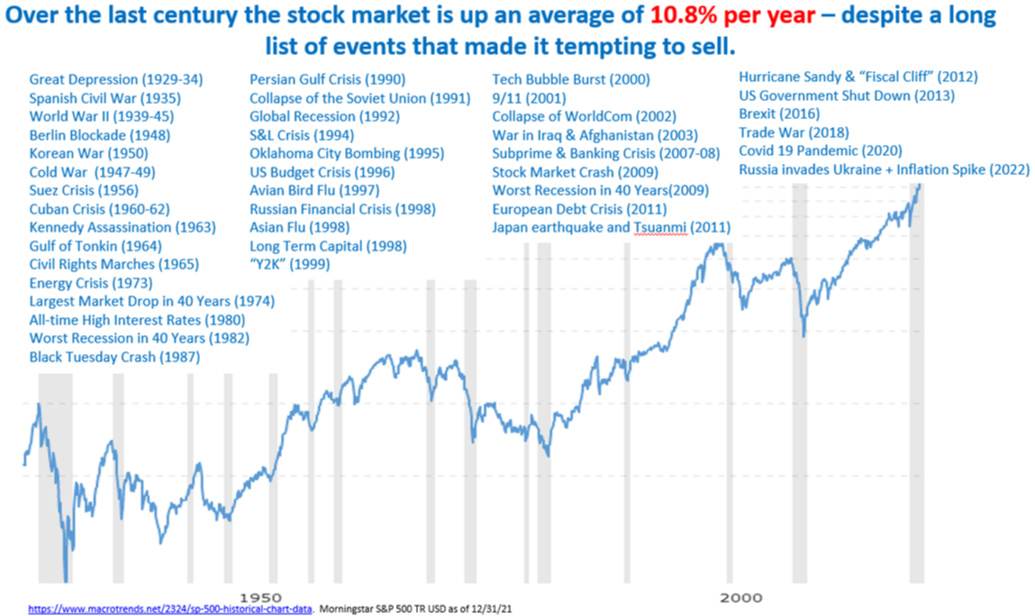 There is always a reason not to invest, but those who remain invested throughout have historically been richly rewarded.

We hope this note finds all of you well and we wish you the best in the coming months.

The information provided here is for general informational purposes only and should not be considered an individualized recommendation or personalized investment advice. The investment strategies mentioned here may not be suitable for everyone. Each investor needs to review an investment strategy for his or her own particular situation before making any investment decision.

Diversification, asset allocation and rebalancing strategies do not ensure a profit and do not protect against losses in declining markets. Rebalancing may cause investors to incur transaction costs and, when rebalancing a non-retirement account, taxable events may be created that may affect your tax liability.

Investing involves risk, including loss of principal. Supporting documentation for any claims or statistical information is available upon request.

All expressions of opinion are subject to change without notice in reaction to shifting market conditions. Data contained herein from third-party providers is obtained from what are considered reliable sources. However, its accuracy, completeness or reliability cannot be guaranteed. Examples provided are for illustrative purposes only and not intended to be reflective of results you can expect to achieve. Past performance is no guarantee of future results and the opinions presented cannot be viewed as an indicator of future performance.

Alliance Wealth Advisors, LLC, is registered as an investment advisor with the SEC and only transacts business in states where it is properly registered, or is excluded or exempted from registration requirements. SEC registration does not constitute an endorsement of the firm by the Commission nor does it indicate that the advisor has attained a particular level of skill or ability a SEC Registered Investment Advisor - 150 N. Main St. #202 Bountiful, UT 84010.