For many months running, the headlines in popular press have been largely negative, particularly so in economic matters.  The myopia around the negative has led many to deep economic pessimism.  The tendency of news media to focus on the negative is as old as time.  The old adage, “if it bleeds, it leads” is unfortunately all too common in media generally.  While there are very legitimate reasons for concern, and we are not out of the economic woods, there are reasons for market optimism that are lost on many.  For this month’s Insights, I thought it would be constructive to share a few of these.

We have the benefit of decades of market data in times of war, inflation, and conflict generally and the challenges we see today are not without precedent.  I remember in particular the desperation around the 2007-2008 financial crisis.  During this time terms like “new normal” came into vogue.  Market luminaries postulated that our best days were behind us and that we’d be consigned to low returns for the foreseeable future.  Observe what the market did from 2009-2019:

The market appreciated by 257.68% over this 11-year period and including dividends, the return was 359% with average annual returns clocking in at nearly 15%.  Those who moved to the sidelines and remained there missed out on a remarkable market run.

The late 1970s/early 1980s were a period of national malaise for the United States-inflation was surging, the Soviet Union was ascendant, national debt was high as a result of social spending and the costs of the Vietnam war, and the overall national outlook was somewhat gloomy.  Look, however, at the performance of the Dow Jones Industrial Average from 1982 through the late 1990s.  The Dow appreciated from just over 2,000 to nearly 20,000 over this period of time: 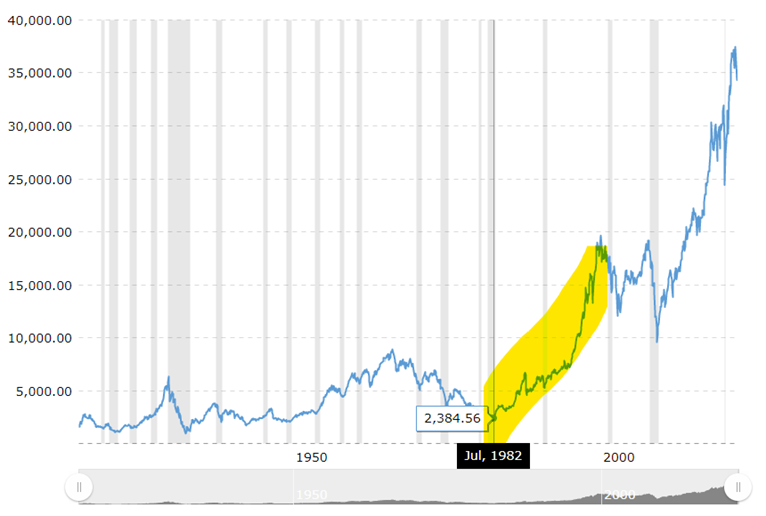 Mark Twain once stated, “The reports of my death are greatly exaggerated” and in a like manner some today are forecasting an exaggerated, hyperbolic negative view of the US capital markets and economy.

The US consumer and US businesses are in an extremely strong position financially.  Observe the trend in cash balances in checking accounts over time.  This is meaningful for two reasons.  The first is that this speaks to the ability of households to better handle economic downturns.  The second is that this historic amount of cash ($3.5 trillion!) sitting on the sidelines is “dry powder” that may eventually make its way into the market as overall sentiment improves in time.

Midterm elections can be challenging for new administrations and recent polling suggest that there is an increasing likelihood that the House of Representatives will change to Republican control.  This would result in a divided government and markets have historically fared best when government is divided: 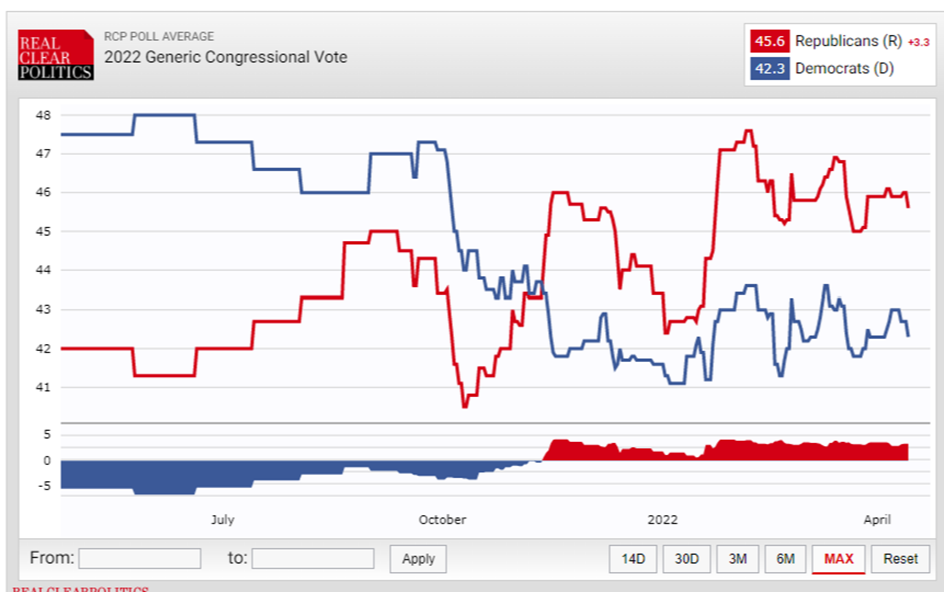 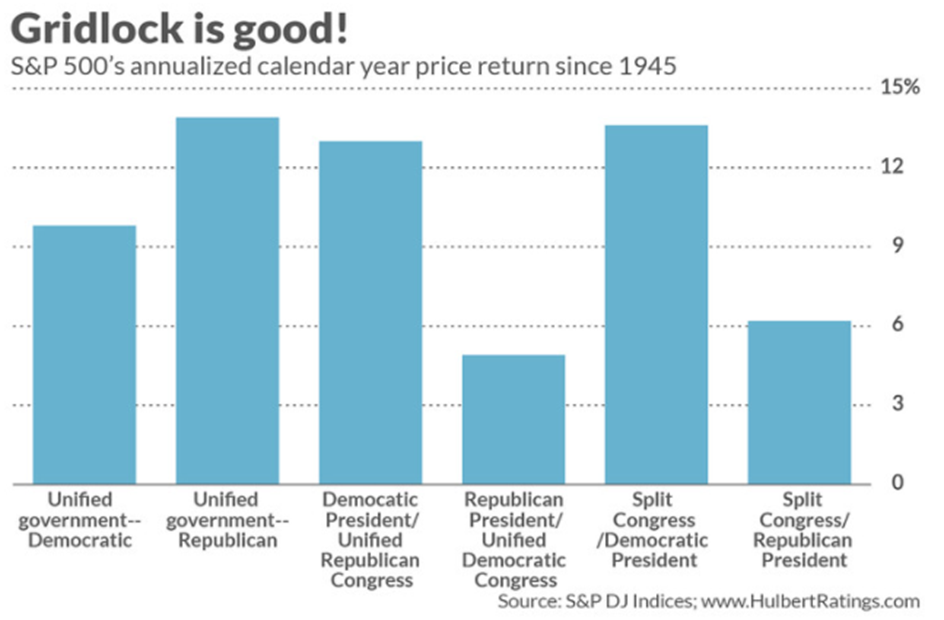 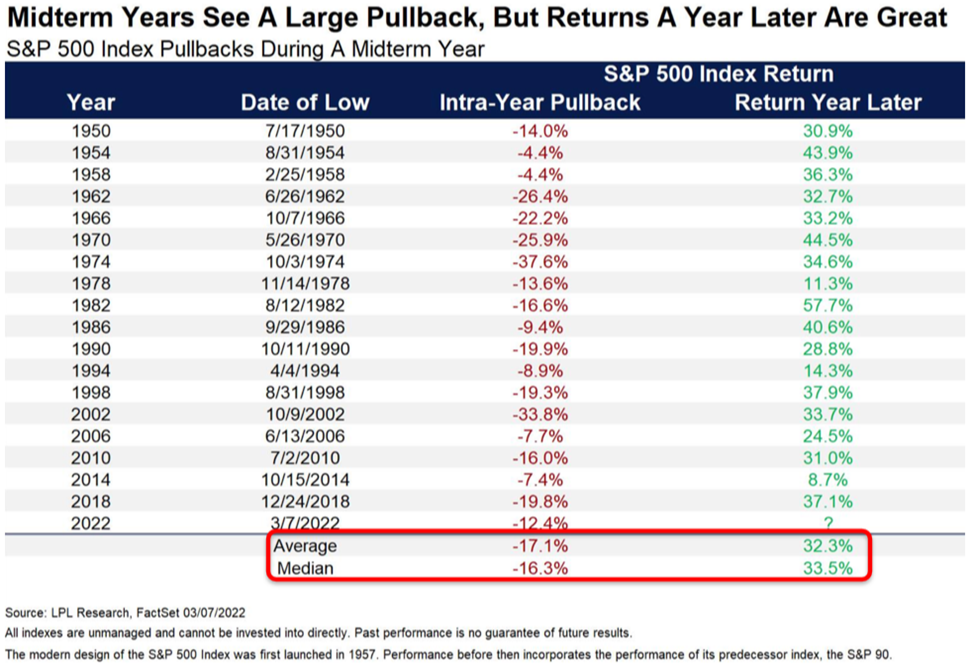 A common adage is that markets hate uncertainty.  The default action of markets when presented with new, negative information is to sell first and ask questions later.  The reason we saw such a steep fall in March of 2020 when COVID hit was that no one had any idea what the ultimate impact would be.  As the economic impact crystallized over time and uncertainty diminished, markets rallied substantially.

Over the past 4-5 months, the market has had to process the following information:

The market viscerally reacted to this news and both equities and bonds have seen significant selling throughout the first several months of the year.  As we continue through the year, we’ll likely see much more clarity on the inflation front and stabilization in some form with the Russia/Ukraine war.  As uncertainty declines, markets have the potential to rally.

While we fully recognize the very real challenges that exist (geopolitical conflict, surging inflation, a waning pandemic and associated fallout, etc.), and that we may yet see additional choppiness, there are reasons for market optimism.  One of the cardinal sins of investing at times like these is to react with emotion and fear.  The United States as a going concern is nearing 250 years and its economy remains incredibly dynamic, innovative, and powerful and the events of the past few months haven’t changed this.

We hope this note finds you well and we wish you and your families the very best.

The information provided here is for general informational purposes only and should not be considered an individualized recommendation or personalized investment advice. The investment strategies mentioned here may not be suitable for everyone. Each investor needs to review an investment strategy for his or her own particular situation before making any investment decision.

Diversification, asset allocation and rebalancing strategies do not ensure a profit and do not protect against losses in declining markets. Rebalancing may cause investors to incur transaction costs and, when rebalancing a non-retirement account, taxable events may be created that may affect your tax liability.

Investing involves risk, including loss of principal. Supporting documentation for any claims or statistical information is available upon request.

All expressions of opinion are subject to change without notice in reaction to shifting market conditions. Data contained herein from third-party providers is obtained from what are considered reliable sources. However, its accuracy, completeness or reliability cannot be guaranteed. Examples provided are for illustrative purposes only and not intended to be reflective of results you can expect to achieve. Past performance is no guarantee of future results and the opinions presented cannot be viewed as an indicator of future performance.

Alliance Wealth Advisors, LLC, is registered as an investment advisor with the SEC and only transacts business in states where it is properly registered, or is excluded or exempted from registration requirements. SEC registration does not constitute an endorsement of the firm by the Commission nor does it indicate that the advisor has attained a particular level of skill or ability a SEC Registered Investment Advisor - 150 N. Main St. #202 Bountiful, UT 84010.