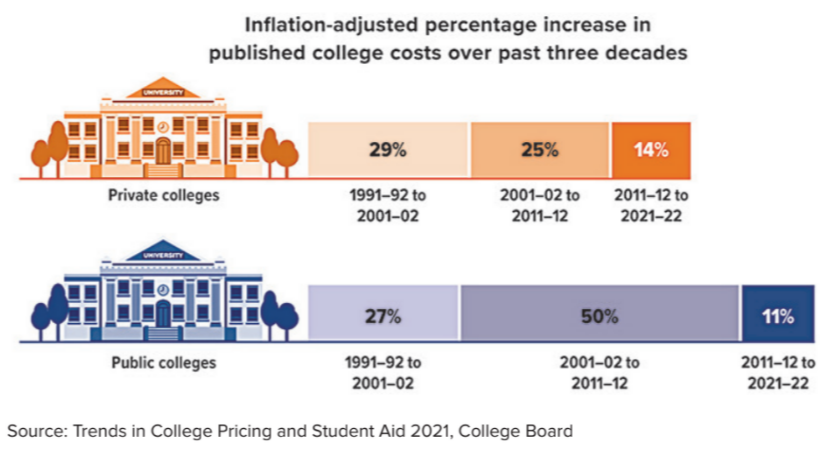 Over the past 30 years, the cost of college tuition, fees, room, and board has increased 85% at private colleges and 111% at public colleges above and beyond the rate of general inflation. After significant cost increases during the 1990s and 2000s, colleges have made a concerted effort over the last decade to rein in cost hikes. This is especially true for public colleges, as states have generally allocated more money to their higher-education budgets after years of cuts. 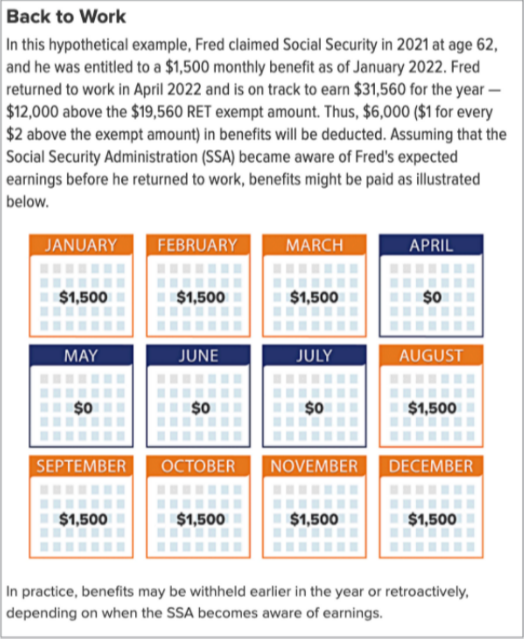 The COVID-19 recession and the continuing pandemic pushed many older workers into retirement earlier than they had anticipated. A little more than 50% of Americans age 55 and older said they were retired in Q3 2021, up from about 48% two years earlier, before the pandemic.1

For people age 62 and older, retiring from the workforce often means claiming Social Security benefits. But what happens if you decide to go back to work? With the job market heating up, there are opportunities for people of all ages to return to the workforce. Or to look at it another way: What happens if you are working and want to claim Social Security benefits while staying on your job?

Some people may think they can't work — or shouldn't work — while collecting Social Security benefits. But that's not the case. However, it's important to understand how the retirement earnings test (RET) could affect your benefits.

The RET might seem like a stiff penalty, but the deducted benefits are not really lost. Your Social Security benefit amount is recalculated after you reach full retirement age. For example, if you claimed benefits at age 62 and forfeited the equivalent of 12 months' worth of benefits by the time you reached full retirement age, your benefit would be recalculated as if you had claimed it at age 63 instead of 62. You would receive this higher benefit for the rest of your life, so you could end up receiving substantially more than the amount that was withheld. There is no adjustment for lost spousal benefits or for lost survivor benefits that are based on having a dependent child.

If you regret taking your Social Security benefit before reaching full retirement age, you can apply to withdraw benefits within 12 months of the original claim. You must repay all benefits received on your claim, including any spousal or dependent benefits. This option is available only once in your lifetime.

Baseball Lessons That Might Help Change Up Your Finances

Baseball stadiums are filled with optimists. Fans start each new season with the hope that even if last year ended badly, this year could finally be the year. After all, teams rally mid-season, curses are broken, and even underdogs sometimes  make it to the World Series. As Yogi Berra famously put it, "It ain't over till it's over." 2  Here are a few lessons from America's pastime that might inspire you to take a fresh look at your finances.

Proceed One Base at a Time

There's nothing like seeing a home run light up the scoreboard, but games are often won by singles and doubles that put runners in scoring position through a series of hits. The one-base-at-a-time approach takes discipline, something you can apply to your finances. What are your financial goals? Do you know how much money comes in and how much goes out? Are you saving regularly for retirement or for a child's college education? Answering some fundamental questions will help you understand where you are now and help you decide where you want to go.

Baseball players must be positioned and prepared to make a play at the base. What can you do to help protect your financial future in case life throws you a curveball? Try to prepare for those "what ifs." For example, you could buy the insurance coverage you need to help make sure your family is protected. And you could set up an emergency account that you can tap instead of dipping into your retirement funds or using a credit card when an unexpected expense arises. 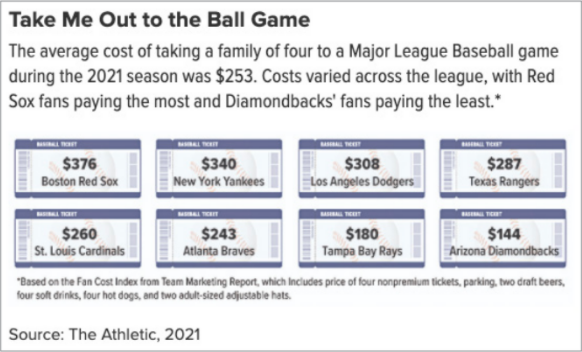 Expect to Strike Out

Fans may have trouble seeing strikeouts in a positive light, but every baseball player knows that striking out is a big part of the game. In fact, striking out is much more common than getting hits. The record for the highest career batting average record is .366, held by Ty Cobb.3 As Ted Williams once said, "Baseball is the only field of endeavor where a man can succeed three times out of ten and be considered a good performer." 4

So how does this apply to your finances? As Hank Aaron put it, "Failure is a part of success." 5 If you're prepared for the misses as well as the hits, you can avoid reacting emotionally rather than rationally when things don't work out according to plan. For example, when investing, you have no control over how the market is going to perform, but you can decide what to invest in and when to buy and sell, according to your investment goals and tolerance for risk. In the words of longtime baseball fan Warren Buffett, "What's nice about investing is you don't have to swing at every pitch." 6

See Every Day as a New Ball Game

When the trailing team ties the score (often unexpectedly), the announcer shouts, "It's a whole new ball game!" 7

Whether your investments haven't performed as expected, or you've spent too much money, or you haven't saved enough, there's always hope if you're willing to learn from what you've done right and what you've done wrong. Hall of Famer Bob Feller may have said it best. "Every day is a new opportunity. You can build on yesterday's success or put its failures behind and start over again. That's the way life is, with a new game every day, and that's the way baseball is." 8

All investing involves risk, including the possible loss of principal. There is no guarantee that any investment strategy will be successful.

Planning to Quit Your Job? What to Know Before You Go

About 4.3 million U.S. workers quit their jobs voluntarily in December 2021, after a record 4.5 million quit in November — the largest number since the Bureau of Labor Statistics (BLS) began recording voluntary job separations in December 2020.9

There are plenty of theories about why people are quitting in droves, including a strong job market and pandemic-induced worker burnout. Regardless of your reasons, here are a few important considerations to keep in mind before you join the employment exodus.

Your plan should reflect reality. Unless you already have a new job lined up, be realistic about how long it might take to re-enter the workforce. According to the BLS, almost one-third of individuals who were unemployed in December 2021 had been out of work for 27 weeks or more.10 Could you afford to maintain your current lifestyle without being paid for six months or even longer? You might need sufficient savings to cover your expenses for at least that long.

You may incur new expenses. Voluntarily leaving your job can affect your financial security in other ways, too. For example, you might lose important workplace benefits, such as typically more affordable group life, health, and dental insurance, and access to an employer-sponsored retirement plan. Maintaining these benefits while unemployed could be financially burdensome at best — or impossible at worst. Before giving notice, assess your entire range of financial needs and the potential consequences of quitting.

It can pay to stay. Because hiring and training new workers can be time-consuming and costly, some employers may be more willing to make concessions to keep the employees they already have. Whether you want a higher salary, new responsibilities, or a different work/ life arrangement, this could be an ideal time to make your case to your employer. Consider listing examples of the current and future value you bring to your job. Then schedule a meeting with your manager to discuss those points and make a proposal. It could turn out to be a win-win proposition.

Alliance Wealth Advisors does not provide tax, or legal advice. The information presented here is not specific to any individual’s personal circumstances.

To the extent that this material concerns tax matters, it is not intended or written to be used, and cannot be used, by a taxpayer for the purpose of avoiding penalties that may be imposed by law. Each taxpayer should seek independent advice from a tax professional based on his or her individual circumstances.